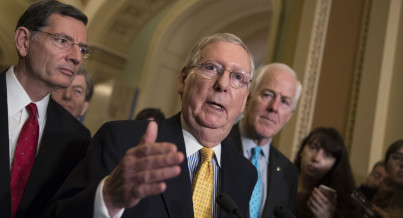 Seriously–what the hell?  Mitch McConnell’s been telling reporters how proud he is that the GOP majority had put the kibosh on Obama’s appointments in the federal court system.  Republicans have had a majority in the Senate since 2015, and since then McConnell and his ilk have ignored most of Obama’s appointments to the federal courts.  This includes the infamous move by the Republicans to refuse holding a hearing for Merrick Garland onto the Supreme Court for nearly a year.  It was a total dick move, especially considering that they’ve even praised Garland in the past for his moderate and fair tendencies.

You just can’t please these people.  All they cared about was a Democrat nominated these judges, and they weren’t going to approve any of these candidates.

So…yeah.  Now, McConnell’s totally patting himself on the back (or shell, if you will), since now Trump will be able to fill those positions with lifetime appointees.  God dammit.

This attitude is already following up a rather weird year.  The House Republicans voted for the stupid new Health Care Bill to get through, despite how most of them hadn’t read it.  Republicans have been falling over themselves defending Trump at every turn.  This week, Paul Ryan totally claimed that it was only inexperience that caused Trump to clear the room so that he could speak to James Comey alone.  You know, to commit obstruction of justice by asking him to drop an active investigation.  Because only an newbie president with no knowledge of the consequences would clear the room first before saying anything incriminating.

Seriously, Paul Ryan?  How much of a stretch is that?

This isn’t even adding in John McCain‘s weird questions at Comey’s testimony or the election of a House Representative from Montana after he committed actual physical assault on a reporter.  “Everyone makes mistakes,” as Republicans claimed after Greg Gianforte of Montana literally beat up a reporter.  It’s a general attitude that Republicans can do no wrong, even when it’s obvious that they are very much doing wrong.

I’m not saying that the Democrats are all saints here.  I’m really not.  They have a tendency to be smug and ignore people in rural communities.  However, they don’t defend their own when they severely screw up.  When Anthony Weiner lied to the press and claimed his phone had been hacked after he’d sent a dick pick, the Democrats dropped him like a hot potato.  When Jon Edwards used campaign funds to hide an affair, the other Democrats distanced themselves really quickly.  They might defend smaller transgressions, particularly those of a personal nature as we really don’t give a shit as long as everyone involved were consenting adults, but Democrats will not tolerate abuse of political power.  I rather like that.